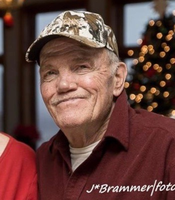 Conneaut- Richard G. Saylor, 80, lifelong resident of Conneaut passed away peacefully on Saturday, February 1, 2020. at UH-Geauga after a brief illness. He was born on June 16, 1939 in Conneaut the son of George and Betty (Quinn) Saylor. Rich was a 1957 graduate of Conneaut High School. After graduation he enlisted in the United States Marine Corps, serving proudly. Rich was employed as a dispatcher for Norfolk Southern, retiring after 41 years of service. He served as President of the Conneaut AERIE Lodge #408 for 14 years; Past Governor of Conneaut Moose Lodge #472 for two years; and was a member of the American Legion Cowle Post #151 and the VFW Post #2836. In addition, he served as Vice-President, Chief Cook and Bottle Washer of the Hippo Ridge Hunting Club. Richard loved the outdoors, enjoyed hunting and fishing. He spent time boating and teaching the kids to water ski. Rich was a diehard Cleveland Browns and Cleveland Indians Fan. He also enjoyed watching Ohio State Football, since his son's high school and college football days. Above all else, Richard loved spending time with his family and friends. He is survived by his loving wife of 57 years, Diane Tessmer Saylor, whom he married on June 30, 1962 at the 1st United Methodist Church in Conneaut; children, Sherri Saylor-Stiltner, Sondra Saylor and Scott (Kristine) Saylor; grandchildren, Kevin (Charlene) Smith, Brooke and Jake Saylor; great-granddaughter, Olivia Smith; twin brother, Robert (Beth) Saylor; brother, Jon (Rose) Saylor; beloved dog, Rhyleigh; and many dear friends and family. He was preceded in death by his parents; and his dear grandson, Kristopher Smith. A memorial service will be held Monday, February 3, 2020 at 2:00PM at the Thompson-Smith-Nesbitt Funeral Home, 345 Main St., Conneaut, with Pastor Jan Walsh, officiating. Friends and family will be received at the Conneaut Eagles for a time of food and sharing following the service. In lieu of flowers, memorials may be given to the Galactosemia Foundation, envelopes will be available at the funeral home or online at www.galactosemia.org, in honor of his grandson Jake who has this rare metabolic disease. Online guestbook, condolences and tribute video available at www.thompsonsmithnesbitt.com