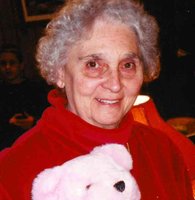 Conneaut- Rita M. Mackey, 89, passed away peacefully on Friday, February 12, 2021 at the Ashtabula County Nursing home after a brief illness. Rita was born on May 29, 1931 in Conneaut, Ohio the daughter of Fiory and Clotilda (Best) Muchiarone. She was a lifetime member of the Corpus Christi Parish and attended St. Francis Cabrini Catholic Church. Rita was active in church and for many years served as lector and Eucharistic Minister. She was also involved with Big Brothers and Big Sisters. Rita also coached Little League Girls Softball teams. She was an avid fan of her children’s sports. Rita enjoyed spending time on the water with her late husband, Eugene and going for rides on their boat “Karen,” as well as going to the cabin with her family. She helped the Lake Erie Boat Club Blessing of the Fleet for several years. Rita was a 60-year member of the 8 O’clock Friendship Club. In her leisure time she enjoyed reading, making rosaries for missions and volunteering at Inn-Conneaut and the Villa at the Lake. She loved her lunchtime get togethers with family and friends. She was employed with Premix as a finisher for 13 years in addition to her duties as a mother raising her family. She is survived by her sons, Bill and David of Conneaut, Eugene (Tesa) and Andy (Beth) of Perry and Steve of Macomb Twp., MI; four sisters, Marie (Robert) Willner of GA, Betty Reed of Kingsville, Judy (Allen) Prasek of Ashtabula, and Norma (Dennis) Bartfai of Conneaut; brother, James Muchiarone of North Kingsville grandchildren, Kevin (Emma), Ben (Lauren), Morgan, Olivia and Victoria; great-grandchildren, Neil and Kay; sister-in-law, Joanne Muchiarone of SC; and a daughter-in-law, Ling Cui Mackey. She was preceded in death by her parents; beloved husband, Eugene Mackey in 2010; son, John Mackey; and her siblings, John and Jerry Muchiarone and Lenore Taylor. A memorial mass will be held later this year for the public and will be announced by the Thompson-Smith-Nesbitt Funeral Home, 345 Main St., Conneaut. Burial took place at St. Joseph Cemetery. Memorials in her name may be given to the Corpus Christi Parish, 744 Mill St., Conneaut or the American Heart Association, 1689 E 115th St., Cleveland, OH, 44106. Online guestbook and condolences available at www.thompsonsmithnesbitt.com