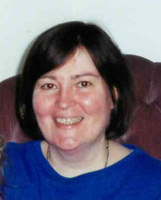 Conneaut- Alison Jean Burnham, 66, died unexpectedly on January 22, 2021 at UH-Cleveland after years of patiently waiting for a liver transplant. She was born on September 10, 1954 in Conneaut, Ohio the daughter of James and Margaret (Nicholson) Burnham. Alison graduated from Conneaut High School Class of 1973, where she was an active member of the band and women's chorus. Despite struggling with what was later diagnosed as Dyslexia, she earned a Bachelor of Science in Law Enforcement Administration, a Master of Education, and a Master in Community Counseling from Kent State University. Alison worked at Kent State University and the University of Akron, where she was director of student affairs and residence services. Most recently, she worked for the Ashtabula County Job and Family Services, as a supervisor of social services. She was a member of St. Paul Episcopal Church in Conneaut, where she was one of the first female acolytes. Following the closure of St. Paul, she attended St. Peter Episcopal Church in Ashtabula, where she served on the vestry and volunteered in many capacities. Alison enjoyed volunteering at G.O. Ministries, was an avid reader, enjoyed baking, watching period pieces on PBS, and listening to talk radio. Alison, also enjoyed theater and attending concerts for all types of music, including jazz, country, classical, and disco. She was especially fond of children, the elderly and enjoyed spoiling her nieces and nephews. Alison was preceded in death by her parents; and her sister, Heather. She is survived by her brother, James (Yaowalak) Burnham of Winchester, CA; sisters, Susan Merriman of South Euclid and Christine (Jeff) Nolletti of Wooster; brother-on-law, Thomas Gwilt; nieces, Piyada Burnham, Brooklyn and Lexi Nolletti, Hillary Gwilt; and her nephews, Tyler Merriman, William, Matthew and Jason Burnham. The family would like to thank Marilyn, Connie, Mary, Pat, the Tobias, Shiley, Nelson and Gaugh families, neighbors, as well as her St. Peter Church family for their help and dedication. Memorial contributions may be made to St. Peter Episcopal Church Food Pantry, PO BOX 357, Ashtabula, OH, 44005-0357. A memorial service will be held at a later time and will be announced by the Thompson-Smith-Nesbitt Funeral Home, 345 Main St., Conneaut. Online guestbook and condolences available at www.thompsonsmithnesbitt.com