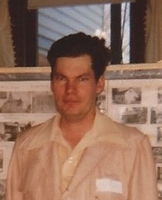 Ashtabula- Gene Raymond Brewer, 71, passed away peacefully on Wednesday, July 21, 2021 at Saybrook Landing. Gene was born on August 19, 1949, in Conneaut, Ohio the son of Raymond and Winnifred (Davis) Brewer of Bushnell. He resided his entire life in Ashtabula County. Gene graduated from the Ashtabula County Vo-Ed. Growing up he was a Boy Scout for much of his childhood and early teens. He liked to do carpentry work, was an avid postcard collector and held many exhibits of his cards. Gene also participated in the annual Pioneer Picnic held in Pierpont for many years. He helped prepare the picnic grounds by brush hogging and other jobs. Gene looked forward to camping there during the week of the picnic and operating his booth selling Middlefield Swiss cheese. He was preceded in death by his father, Raymond in 1980 and his mother, Winnifred in 2004. Gene is survived by his two sisters, Barbara Brewer of Winter Haven, Florida and Laurie Gilkerson of Jefferson; nephew, Randy Gilkerson and a niece, Amy Gilkerson. A graveside service will be held Tuesday, July 27 at 11:00AM at the Kelloggsville Cemetery with Rev. Kevin Phillips, officiating. In lieu of flowers memorials in his name may be given to the family in care of Thompson-Smith-Nesbitt Funeral Home to be donated to the Saybrook Landing, Activities Fund. Funeral arrangements entrusted to the Thompson-Smith-Nesbitt Funeral Home and Cremation Services, 345 Main St., Conneaut. Online guestbook and condolences available at www.thompsonsmithnesbitt.com