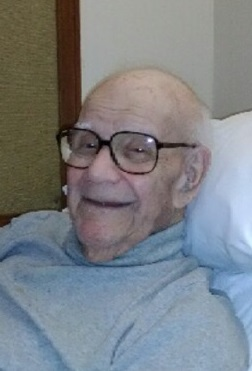 Euclid- Richard G. Zundel, passed away peacefully on Tuesday, October 23, 2018 at Hillcrest Hospital with his family at his side.

He was born on March 21, 1926 in Conneaut, Ohio the son of Ormond M. and Helen (Knight) Zundel. Richard graduated from Conneaut High School Class of 1944 and after graduation served honorably in the United States Army, during World War II, where he was an Expert Marksman.  He also graduated from the Cleveland Cooper Arts School.

Mr. Zundel was employed for 31 years at General Electric, where he was a draftsman. Richard was an artist, avid chess player, and loyal Cleveland Sports fan. He enjoyed music, especially Johnny Cash and Turner Classic Movies. Richard loved to walk and could be spotted walking all over Conneaut after retirement. He was also proud of being independent into his 90’s and still able to renew his driver’s license!

He was preceded in death by his parents; beloved wife, Betty V. Suvanto Zundel in 1990; son, Daniel G. Zundel, Sr.; and a brother-in-law, Edwin Suvanto.

Calling hours will be held, Thursday, October 25, 2018 from 11:00AM-12:00PM at the Thompson-Smith-Nesbitt Funeral Home, 345 Main St. Conneaut, where funeral services will follow at 12:00PM. Burial at Greenlawn Memory Gardens.

To send flowers to the family or plant a tree in memory of Richard Zundel, please visit Tribute Store
Thursday
25
October