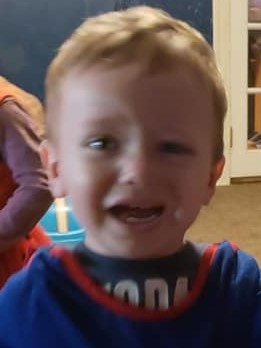 Please share a memory of Carter to include in a keepsake book for family and friends.
View Tribute Book

Carter Albert Hall-Richards, 17 mos., was carried to heaven on the wings of an angel January 3, 2019.

He was born July 21, 2017 in Ashtabula the son of Ronald and Samantha (Hall) Richards. In the short time Carter was here, he has touched the hearts of all his family. You would always find Carter with his favorite blanket. He enjoyed playing with his siblings and being chased around and watching his favorite cartoons Peppa Pig and Bubble Guppies. He could be stubborn at times but was a very loving boy. He will forever be missed by his family.

He was preceded in death by his paternal grandfather, Richard Richards; and his great-grandparents, Jon (Sandra) Mosier, and Marguerite Hall.

Funeral services will be held on Wednesday, January 9, 2019 at 11AM at the Thompson-Smith-Nesbitt Funeral Home, 345 Main St., Conneaut.

To send flowers to the family or plant a tree in memory of Carter Hall-Richards, please visit Tribute Store
Tuesday
8
January

Share Your Memory of
Carter
Upload Your Memory View All Memories
Be the first to upload a memory!
Share A Memory
Send Flowers
Plant a Tree