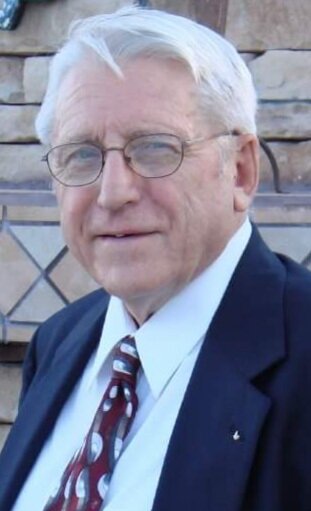 Please share a memory of Bill to include in a keepsake book for family and friends.
View Tribute Book
William H. (Bill) Merritt, 93, passed away peacefully on July 27th, 2021 at Aster Elder Care, Lake Havasu City, AZ He was born in Conneaut, OH to the late Wilford M. and Dorothea (Hopkins) Merritt and lived in West Springfield, PA his entire childhood. Bill graduated from West Springfield High School in 1945. After High School, he joined the US Coast Guard and served as a radio man aboard the Coast Guard Cutters Mistletoe and Yocona off the coast of Alameda, CA. during WWII. After his honorable discharge, Bill worked miscellaneous jobs for a short time before he was hired at Pittsburgh and Conneaut Dock Company as a machinist and scales technician, positions he held until his retirement in 1989. Thanks to their mutual friend, Agnes Sawyer, Bill met and married Sarah J. (Sally) Buss on June 18, 1955. Together, Bill and Sally settled down in Conneaut and raised four daughters. They were happily married for 39 years until Sally’s passing. In the mid 1970’s, Bill owned and operated Merritt Concrete Steps. He custom built and installed concrete steps and wrought iron railings for homes and businesses all over Ashtabula County. He was an all-around “jack of many trades” and enjoyed anything that pertained to mechanics, electronics, woodworking and construction. He could take any idea and make it real! Bill was a long time member of the former Conneaut First United Methodist Church and was a trustee for many years. In his spare time, he enjoyed building model trains, camping, gardening, and traveling, spending time with his family and his motorcycle which he rode across the country. In 2004, he moved to Lake Havasu City, AZ to be closer to family and to enjoy more sunshine! Bill is survived by his daughters, Barbara (Jeffrey) Loomis of Palm Harbor, Fl; Elizabeth (Richard) Titus of Lake Havasu City, AZ and Marcy (Mark) Manniko of Golden, CO. Grandchildren Jennifer (Kevin) Cook, Scott (Tabitha) Leadingham, Kyle (Tiffany) Loomis, Daniel (Samantha) Loomis, Melissa (Amaris) Estrada, Korey Titus (Travis Vest), Evan Manniko, Mia Manniko, ten great – grandchildren, sister in law Theresa Buss Gebhardt of Elyria, OH and several nieces and nephews. Besides his parents, he is preceded in death by his wife, Sally; daughter, Leslie Leadingham and granddaughter, Katie Titus. As requested by Bill, a graveside service will be held Saturday September 18, 11:00am at Glenwood Cemetery Conneaut, Oh. Kyle Loomis, Bill’s grandson, will officiate and military honors will be conducted by American Legion Cowle Post 151. In Lieu of flowers, donations can be made to Hospice of Havasu 232 London Bridge Rd Bldg A. Lake Havasu City, AZ 86403 or to Conneaut Railroad Museum 363 Depot St. Conneaut, Oh 44030 *A heartfelt thank you to Carlena Ashley and her team of aides at Aster Elder Care for their exceptional care of our dad these past four years. We will be forever grateful for all your dedication, integrity and compassion. Local arrangements entrusted to Thompson-Smith-Nesbitt Funeral Home and Cremation Services, 345 Main St., Conneaut. Online guestbook and condolences available at www.thompsonsmithnesbitt.com
To send flowers to the family or plant a tree in memory of Bill Merritt, please visit Tribute Store
Saturday
18
September

Share Your Memory of
Bill
Upload Your Memory View All Memories
Be the first to upload a memory!
Share A Memory
Send Flowers
Plant a Tree