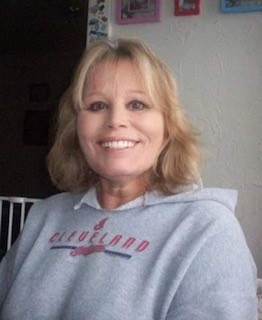 Please share a memory of Jacqueline to include in a keepsake book for family and friends.
View Tribute Book
Conneaut- Jacqueline Ann Almberg, 58, passed away on December 20, 2021, at UH-Conneaut Medical Center after a brief but courageous battle with Covid19, despite being fully vaccinated and took every precaution to not catch it. She advocated to others to take Covid seriously. She was born on October 11, 1963, in San Francisco, California. Jackie was born into a military family, moving frequently but grew up in California. She attended Alta Loma High School. Jackie enjoyed being helpful and early on was a caregiver for many years for the elderly at nursing homes throughout southern California. She also enjoyed being a waitress, until her health prevented her from working. Her and her daughter had an unbreakable bond which will be forever cherished and was strengthened when she moved to Ashtabula County. Jackie loved all things motorcycles, and nothing beat a Sunday ride on a Harley, leaving all her cares in the wind. Later in life, she was most content to be at home, where she was most comfortable. Jackie enjoyed watching old movies and television shows, as well as catching the daily soap operas. She would call her sister and best friend, Dana, daily and they would watch Days of Our lives together. In addition, she was friendly with the Amazon driver, and looked forward to her online purchases arriving. However, it was her family that meant the most to her, she loved her children, and especially cherished her grandchildren, who were her world and was proud of them. Jackie is survived by her children, Sheri Seal Furmage and Mikel Arvizu, Jr.; parents, Richard and Irene Mooney; grandchildren, Emma Gutierrez, Brendan, Cheyenne and Laci Haley, and Noah Furmage, who was her pride and joy; great-granddaughter, Jayda; siblings, Dana Cook, Angela (David) Stevens, and Richard Mooney, Jr.; sister-in-law, Ginger (Robert) Monge; brothers-in-law, James Seal, Robert Seal and Christopher (Rebecca) Seal. She was preceded in death by her biological father, Phillip Cook. Our Father, who art in heaven, hallowed be thy name, thy kingdom come, thy will be done, on earth as it is in heaven. Give us this day our daily bread. And forgive us our debts, as we forgive our debtors. And lead us not into temptation, but deliver us from evil. For thine is the kingdom, and the power, and the glory, forever. Amen. Respecting her wishes, she will be cremated, and a celebration of life service will be determined at a later date. Funeral arrangements entrusted to Thompson-Smith-Nesbitt Funeral Home, 345 Main St., Conneaut. Online guestbook and condolences available at www.thompsonsmithnesbitt.com
To plant a beautiful memorial tree in memory of Jacqueline Almberg, please visit our Tree Store

Share Your Memory of
Jacqueline
Upload Your Memory View All Memories
Be the first to upload a memory!
Share A Memory
Plant a Tree