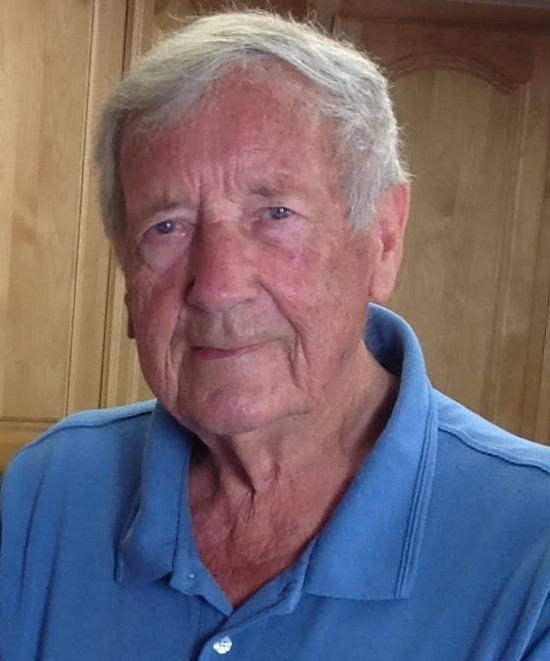 Please share a memory of Andrew to include in a keepsake book for family and friends.
View Tribute Book
Andrew (Andy) Hutchison Campbell of Conneaut, Ohio, passed away on Wednesday, March 9, 2022, at the age of 94 with his wife, Mary, at his side holding his hand. He was born on December 6, 1927, in Kilsyth, Scotland to David and Martha Campbell and was one of nine children. He graduated from the Kilsyth Academy at the age of 14. After leaving school he began his apprenticeship with Barrowman’s butcher shop in Kilsyth. In 1946, he joined the British Army serving as a butcher while stationed in Singapore. Following his honorable discharge, he returned to Kilsyth for three additional years to finalize his apprenticeship. In 1952, he married Mary McKenzie Long, also of Kilsyth. In 1958, Andy emigrated alone to the United States and resided in Girard, Ohio with his brother, John. Andy quickly found a local position through the Canadian supermarket chain, Loblaw’s. After working for several months in Girard, Andy was offered an opportunity to relocate to Conneaut where he would assume the management of the meat departments of the Conneaut, Ashtabula and Saybrook stores. Six months later, his wife and three daughters emigrated and joined him. Over time, his family expanded to include three sons. In the late 1970s, the Loblaw organization closed their Ohio stores. Rather than accepting a relocation, Andy wanted to remain in Conneaut. He began a series of employment positions with Orlando’s, Value King, and for many years, as an employee of the P&C Dock Company. During retirement, Andy and Mary established the Braemar Bed & Breakfast and acquired investment properties. He was a self-taught electrician, plumber, painter, and carpenter. Andy was a 55-year active Master and Royal Arch Mason member of the Evergreen Masonic Lodge #222. His favorite vacations were spent in Canada, particularly Nova Scotia and the New England states. He lived in Florida during the winter months. As an accomplished player in club soccer in his native Scotland, Andy was instrumental in introducing the sport in Ashtabula County, both as a coach and league organizer. As a young man, he was known for his running speed, accomplishing the 100-yard dash in 11 seconds. In his later years, he would be up at dawn on Saturday mornings tuning in to watch his beloved Glasgow Rangers as well as teams in the English Premier League. Andy played on both golf and bowling teams for El Kadir Grotto and continued to play golf each summer at Maple Ridge Golf course. He was the first on the dance floor at a wedding or ceilidh. He began and ended each day singing or humming a song. His joie di vivre was his calling card, and he made an immediate and uplifting impact on friends, children and animals. Andy will be remembered to all whom he encountered for his work ethic, positivity, fairness, encouragement, kindness, commitment to exercise and education, love of music and the arts, as well as his love for America, Canada and of course, Bonnie Scotland. Survived by his wife, Mary, of 70 years, his six children: Sheona (Toronto, Canada), Gloria (Conneaut), Melinda (Cincinnati), Gordon (New York), Colin (Seattle), Alan (Denver), and seven grandchildren: Amanda, Katie, Kelsey, Chloe, Lauryn, Sam and Charlie. Preceded in death by his parents, David and Martha Campbell; brothers: David, Robert, and John; sisters: Mattie, Margaret, Olive, and Elizabeth, all of Scotland. The family wishes to acknowledge and thank the staff of the Villa on the Lake and the Hospice of the Western Reserve for their excellent care, kindness and compassion. Memorial contributions in lieu of flowers can be made to the United Church of Christ Music Ministries, Conneaut Arts Center and Hospice of the Western Reserve. Calling hours will be observed at the Thompson-Nesbitt Funeral Home, 345 Main Street, Conneaut, Ohio, on Thursday, March 17, from 5pm until time of service at 6pm with Rev. Joyce Shellhammer officiating. Masonic Rites will follow the service at 6:15pm. At Andy’s request, his ashes will be returned to his homeland, Scotland.
To send flowers to the family or plant a tree in memory of Andrew Campbell, please visit Tribute Store
Thursday
17
March

Share Your Memory of
Andrew
Upload Your Memory View All Memories
Be the first to upload a memory!
Share A Memory
Send Flowers
Plant a Tree