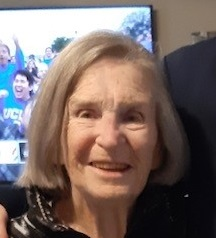 Please share a memory of Anna to include in a keepsake book for family and friends.
View Tribute Book
Jefferson - Anna Leander Gibson, 83, of Champion, previously of Jefferson, passed away peacefully on Wednesday, May 4th, 2022, after numerous health issues over the past year. Anna was born on December 10th, 1938, in Newport, Rhode Island, the daughter of Antone J. and Kathleen (Murray) Leander. She married Ronald E. Gibson on October 6, 1964, in Newport, Rhode Island. Anna enjoyed life and her large family. She was married to her husband for over 50 years. Anna also loved her children, her grandchildren, and her many nieces and nephews. She loved and spoiled them all. Anna was especially close to her two brothers and her sister. Anna was not much of a traveler; however, after leaving Newport to raise her children in Ohio, she drove back every summer to be with her Rhode Island family, where there was always a bed at the family homestead. As a child, she was an avid skater, spending much time on the frozen ponds of Newport. Anna was a person of simple means who enjoyed a simple life. She especially loved flowers and birds. Regarding her love for flowers, she had the pleasure of growing up on the beautiful estates of Newport, where her father worked as a gardener. Anna also had a special bond with birds, especially hummingbirds. Anna's favorite holiday was Christmas. She loved to decorate and she loved to pass out presents. Anna wasn't a wealthy person; however, she always found a way to help others. She enjoyed the simple life of small town Ohio and her quiet summer vacations spent on the beaches of Newport. Anna saw the best in people and was always there to offer a helping hand. Anna will be missed, but more importantly, she will be remembered. Anna is survived by sons, Ron (Chris) Gibson, of Jefferson, and Joseph (Rachelle) Gibson, of Columbus; daughter, Julie (Jim) Wright of Champion; nephew, Gerard (Kathy) Beattie of Madison; nieces, Kathleen Beattie and Catherine Barrett Beattie of Newport, RI; grandchildren, Ron and Kevin Gibson of Jefferson, Louis, Chloe, and Gus Gibson of Columbus, Samuel, Savanna, Aiden and Vincent Wright of Champion; great nieces and nephews Elizabeth Beattie of Cincinnati, Gerard Beattie of Colorado, Erik (Mary) Beattie and Katherine Beattie of Madison; and great, great niece Sophia Beattie of Cincinnati, and great, great nephew Anton Beattie of Madison. and many loving cousins, and other nieces and nephews. Anna was preceded in death by her husband, Ron, her parents, her brothers, Anthony and Joseph Leander, and her sister, Julie Beattie. At Anna's request, there will be no public service. Private inurnment will take place at Oakdale Cemetery at a later date. Thompson-Smith-Nesbitt Funeral Home and Cremation Services, 345 Main St., Conneaut is entrusted with arrangements. Online guestbook and condolences available at www.thompsonsmithnesbitt.com
To plant a beautiful memorial tree in memory of Anna Gibson, please visit our Tree Store

Look inside to read what others have shared
Family and friends are coming together online to create a special keepsake. Every memory left on the online obituary will be automatically included in this book.
View Tribute Book
Services for Anna Gibson
There are no events scheduled. You can still show your support by planting a tree in memory of Anna Gibson.
Plant a tree in memory of Anna

Share Your Memory of
Anna
Upload Your Memory View All Memories
Be the first to upload a memory!
Share A Memory
Plant a Tree